In particle physics experiments, researchers study the nature of elementary particles and fundamental forces by colliding particles. Through the study of these collisions we may find evidence of new, still unknown, fundamental particles that may explain large scale phenomena that we see in the universe, such as the existence of dark matter or the absence of anti-matter in the universe.

In particle physics experiments, researchers study the nature of elementary particles and fundamental forces by colliding particles. Through the study of these collisions we may find evidence of new, still unknown, fundamental particles that may explain large scale phenomena that we see in the universe, such as the existence of dark matter or the absence of anti-matter in the universe. Particle physics experiments make use of multiple layers of particle detectors using different detection techniques that allow us to unravel the physical interactions between the particles created in the collisions. One important detector technology is that of silicon pixel sensors, which allow the reconstruction of the flight trajectories of charged particles. Such silicon pixel sensors have been used in particle physics experiments since a few decades and similar sensors are now also readily used outside particle physics, for example in the camera of your cellular phone. Over the past decades, many technological improvements have been made. The sensors are now thinner, faster and more accurate in recording the spatial hits needed for the reconstruction of the trajectories. 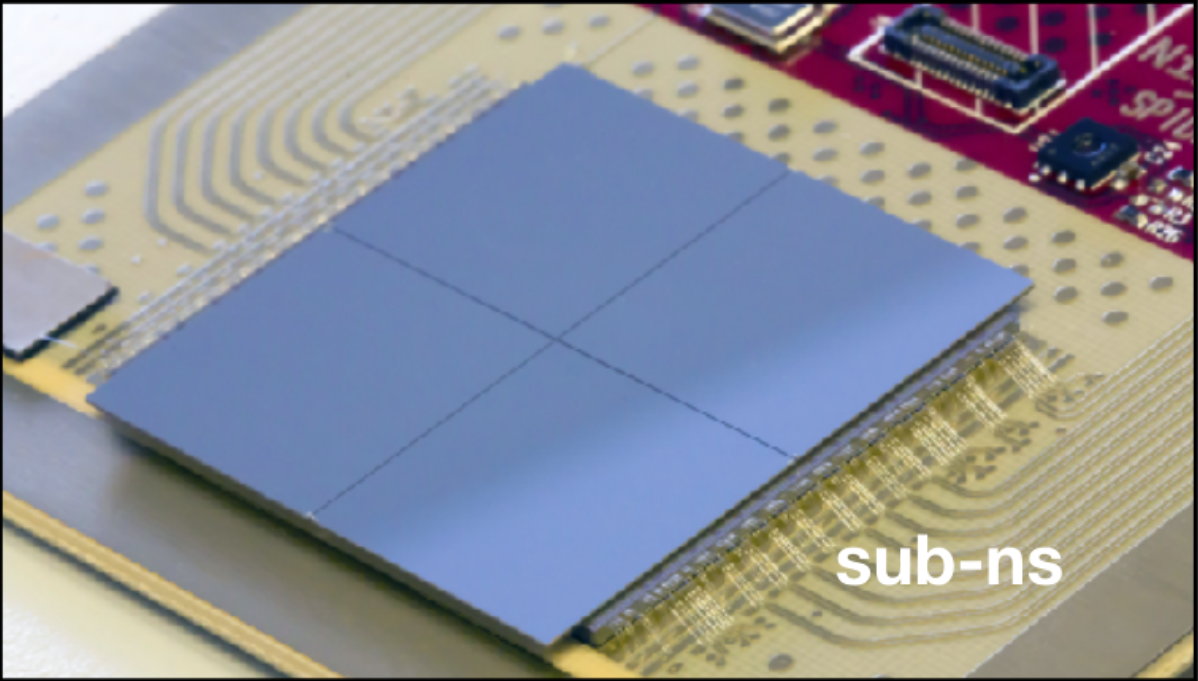 Figure: Nikhef contributed to the development of the Timepix 4 chip that has 200 ps time-to-digital converter (TDC) time bins to record hit time of particles with sub-nanosecond precision. There is ongoing development for further improvement of the time resolution.

We now work on what is most likely the most dramatic improvement of the silicon pixel technology since we started using it. We are adding the functionality to, simultaneously to the already very accurate spatial position, also record the time at which the particle has passed our detector to very high accuracy. The current time precision used in the LHC experiments at CERN is 25 ns. We are aiming to improve the precision of this measurement with a factor 1000 to an order of 20 ps. 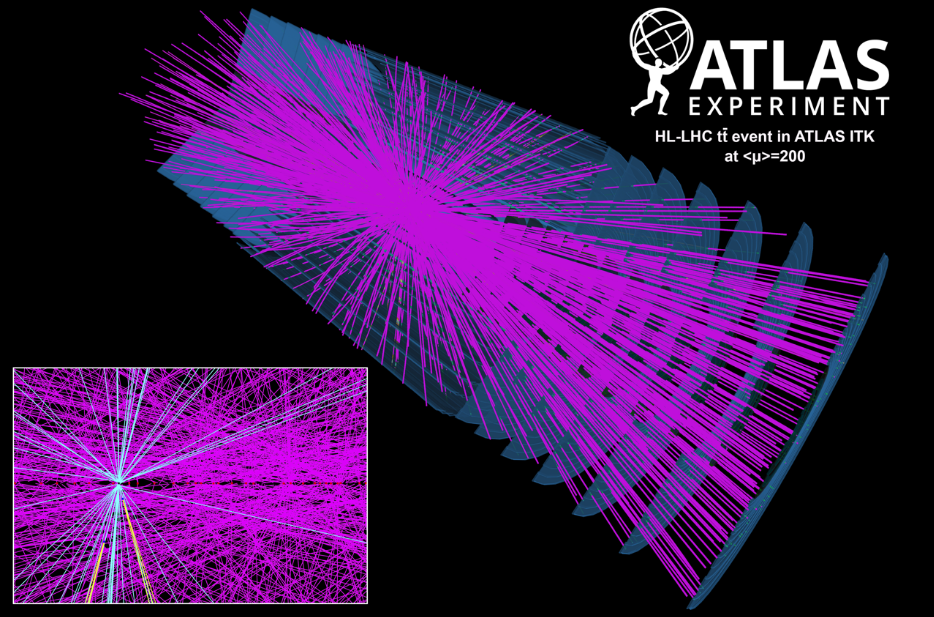 This technological improvement will allow much better separation of those particle collisions that occur almost, but not exactly, simultaneously. These new fast timing detectors are necessary for the advanced so-called High Luminosity LHC that will boost the discovery potential of the experiments at the large hadron collider at CERN. In the Nikhef detector R&D fast timing group, we study technological solutions for upgrades of the LHCb, ALICE and Atlas experiments. 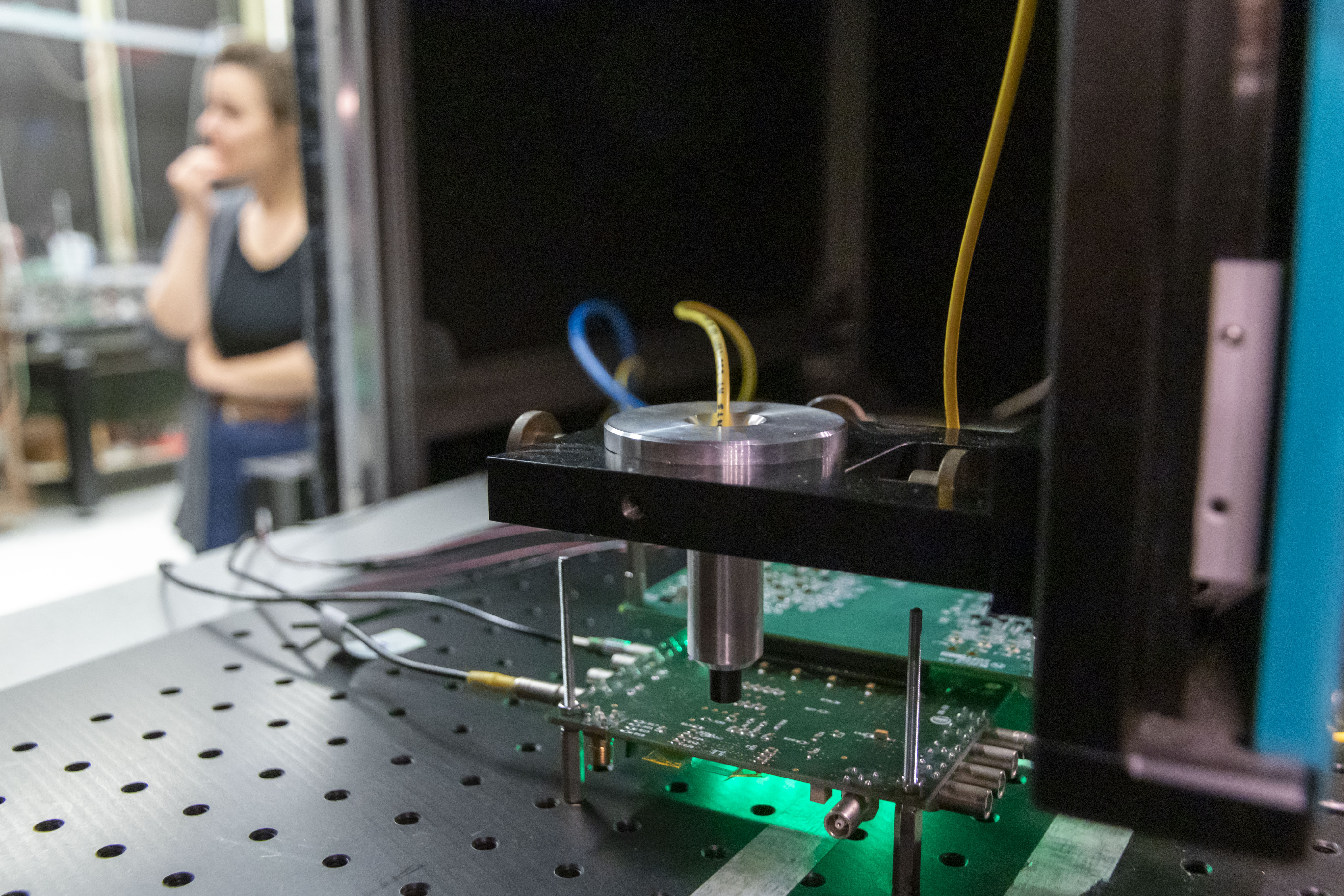 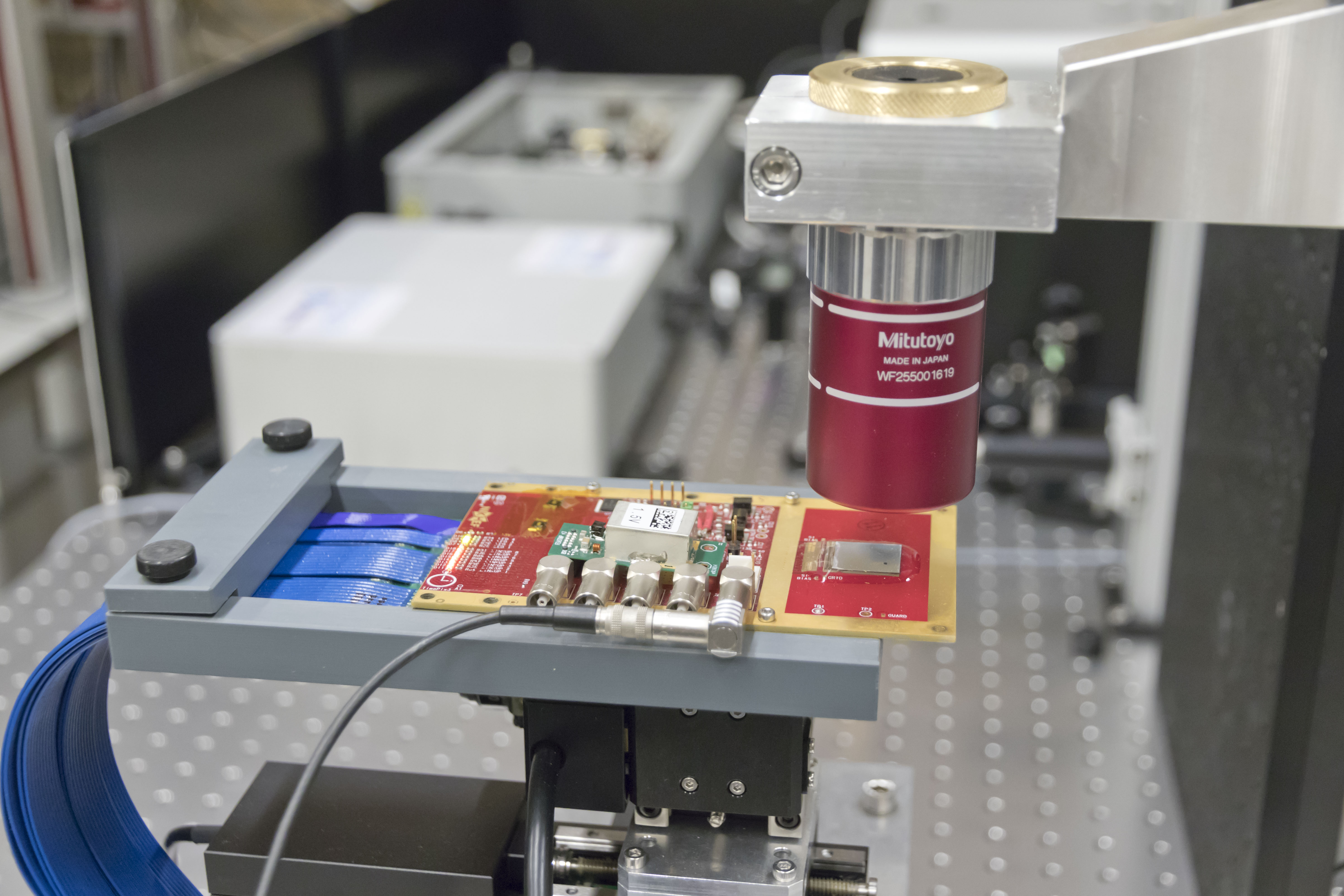 Laser setups at Nikhef for characterization of silicon sensors. The very new two-photon absorption setup with a very fast, very powerful, and very precise femtosecond laser pulse can be used to characterize sensors for future experiments at the LHC and beyond (right).

To be able to reach this next generation silicon pixel detectors, we study the response of several semiconductor sensor technologies in great detail, and are active in the development and design of new sensors and readout chips. We make use of beam experiment facilities in addition to two laser setups locally in our lab. We make detailed simulation studies of the charge transport and response of various sensor designs, working closely together with the ASIC design team in the Nikhef electronics group.

For possible research projects in our group, see the Nikhef project wiki.